How to deal with Rude People

Unfortunately there are people like this everywhere. Can I suggest how you deal with them?

1. Don’t ever be rude back. My mother told me, that two wrongs don’t make a right. Great advice I’ve always thought.
2. They are in a minority, so the chances of you meeting too many are slim.
Again, take the moral high ground and think ‘I don’t want to spend much longer with you.’ How does this rude behaviour manifest itself? It’s generally when people start looking over your shoulder and their eyes are wandering. I think we all accept thsat body language is the most powerful form of communication, so they are saying to you in as clear a manner as if they had a neon flashing sign above their head, ‘I want to be off.’ Read the sign and do them and yourself a favour. When a lull comes in the conversation, simply say: “Well, John, it’s been great meeting you, have a good evening. I promised I’d catch up with Mary over there”.
How do think John is going to feel? Yes, that’s right, relieved of course. He told you a few moments ago he’d like to go; you’ve just done him a favour. Please, don’t you ever act like John. When the conversation has come to its natural end, move on in one of the polite ways mentioned elsewhere.
The majority of people are kind, polite and courteous; they’re the ones you want to build relationships with. Stick with them and avoid the rest.
Check out this rude, yet humorous networker, http://tiny.cc/oyfy3…You don’t want to meet this gentleman, do you? 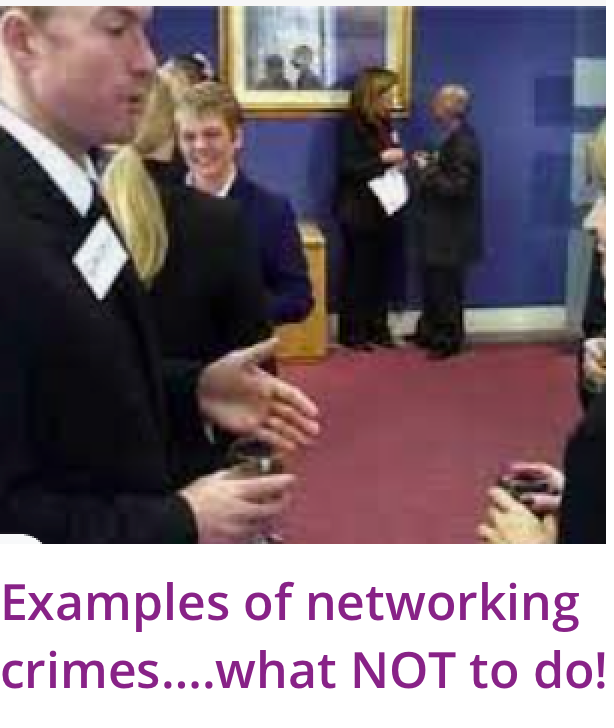