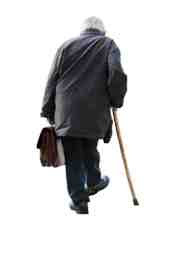 Doctor Goldberg is known throughout as one of the best consultants on arthritis. He always has a waiting room full of people who need his advice and specialist treatment. One day, Henry, an elderly gent, slowly struggles into his waiting room. He is completely bent over and leans heavily on his walking stick. A chair is found for him. Eventually, his turn comes to go into Doctor Goldberg’s office. Fifteen minutes later, to everyone’s surprise, he comes briskly out of his room walking almost upright. He is holding her head high and has a smile on his face. A woman in the waiting room says to Henry, “It’s unbelievable, a miracle even. You walk in bent in half and now you walk out erect. What a fantastic doctor he is. Tell me, what did Doctor Goldberg do to you?”
“Miracle, huh miracle,” says Henry, “he just gave me a longer walking stick!”

Do you have any questions? Would you like to enquire about business networking? Please do get in touch!

This website uses cookies to improve your experience while you navigate through the website. Out of these cookies, the cookies that are categorized as necessary are stored on your browser as they are essential for the working of basic functionalities of the website. We also use third-party cookies that help us analyze and understand how you use this website. These cookies will be stored in your browser only with your consent. You also have the option to opt-out of these cookies. But opting out of some of these cookies may have an effect on your browsing experience.
Necessary Always Enabled
Necessary cookies are absolutely essential for the website to function properly. This category only includes cookies that ensures basic functionalities and security features of the website. These cookies do not store any personal information.
Non-necessary
Any cookies that may not be particularly necessary for the website to function and is used specifically to collect user personal data via analytics, ads, other embedded contents are termed as non-necessary cookies. It is mandatory to procure user consent prior to running these cookies on your website.
SAVE & ACCEPT